Boy, it’s been a long while since I’ve blogged.  Facebook tells me it’s been 75 days. It doesn’t seem that long ago, but time flies when you’re having fun.  We’ve been to San Diego since then, two of my kids had birthdays, been to 6 other kids’ birthday parties, started school, lots of play dates, and so many fun updates to the house.  I do miss writing on this little old blog, but my peeps are only little once, so I’m enjoying them to the max. 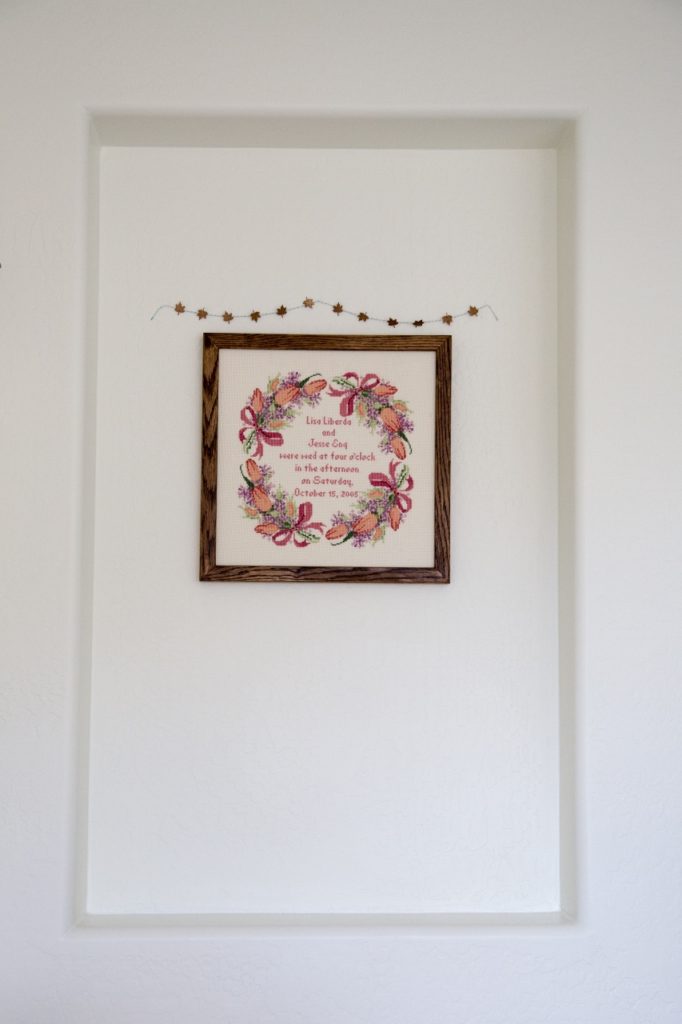 I thought I’d share a simple, yet effective update I made several months back. This little nook is at the top of the stairs in our home.  I was never quite sure what to do with it, so it pretty much stayed like this for 3 years.  Boring, huh?  I mean, I like things simple, but this was not doing it for me. 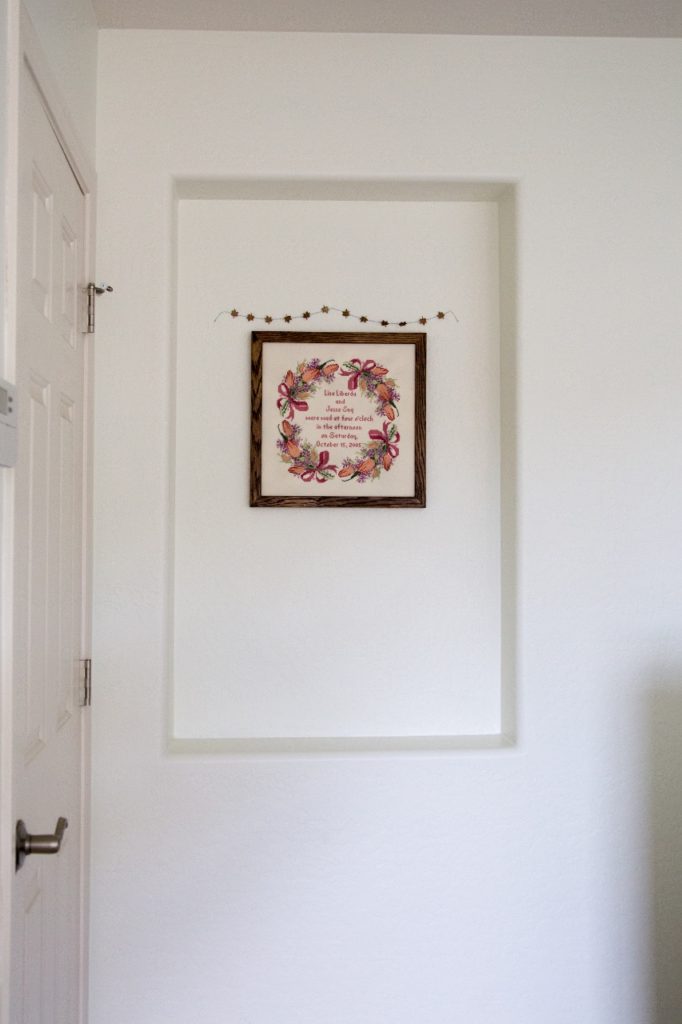 Also, the light shines up here like nobody’s business because we’ve got several windows that let in a ton of light, so I’d like it to shine on something pretty.

One day at the beginning of summer, I just decided to paint it black.  I have little ‘pops’ of black throughout the house (including the inside front door), so this worked really well.  It didn’t cost me anything either because I already had the paint. 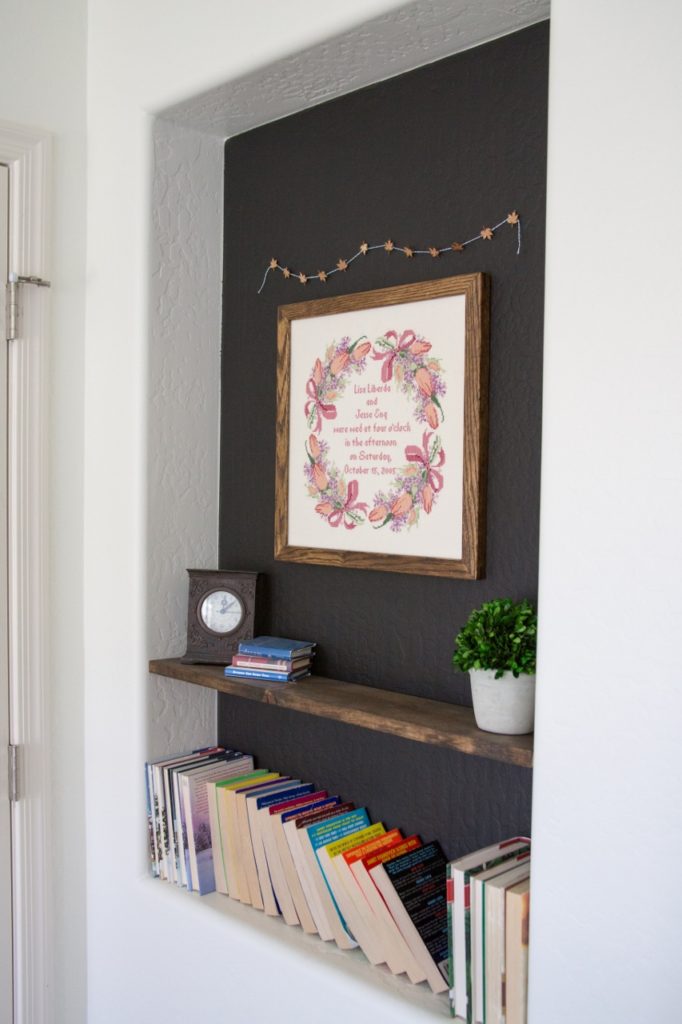 I decided it was still a tad boring, so I found a piece of wood in the garage, stained it and had the hubby cut notches out of the bottom so it could rest on nails he put into the wall and it become a shelf.  I must say, it breaks the space up nicely and allows for some pretty decor items.  You can’t go wrong with a clock and little bit of greenery.  I just love clocks.  I actually like when it’s super quiet (which is pretty much never in the past 7.5 years) and I can hear a clock ticking. LOVE it so much.

Also, I’ve been slowly adding more greenery to the house. Faux stuff mostly because I really don’t have the time to keep anything else alive around here. 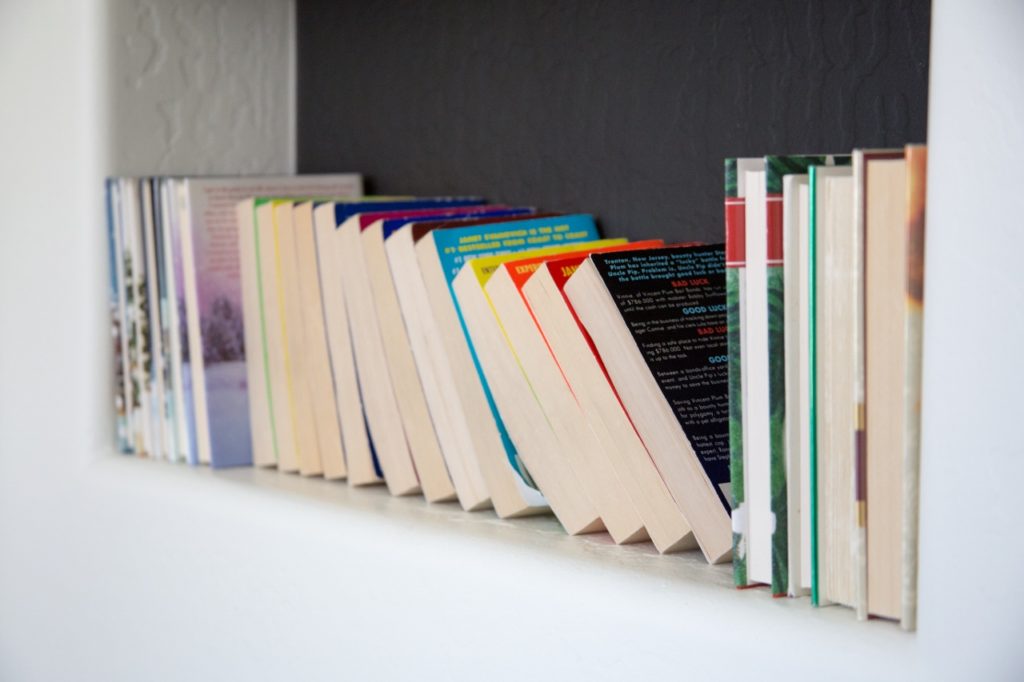 I didn’t like the way all of my neon books (Janet Evanovich!) looked on the shelf and I contemplated covering them all, but A.)  That would take forever and B.) I have 3 children that rip these suckers off the shelf a dozen times a day, so those covers would never last.  So, I just turned them all around and voila.  I kind of dig it. 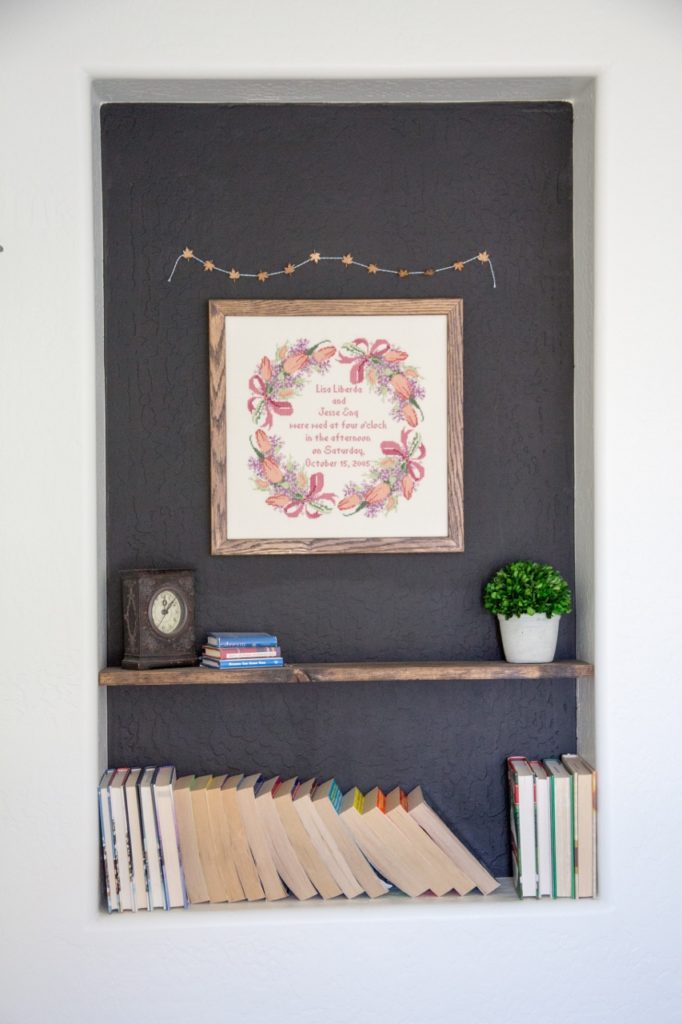 Also, if you follow me on Instagram , we’ve been installing new tile in the Master Bathroom.  I really hope I can blog about that sooner, rather than later.  Let me tell you, it’s a learning experience and is taking what seems like forever.  It’s actually been a month since we started and we only work on it when we have the time.  I can’t wait to be done, so I can share the results…and have a shower and toilet back.