Well, I’ve managed to pretty much fall off the blogging planet again.  I really wanted to do a whole Christmas-y home tour and recap of our family festivities, but it’s a little late now.  Oh well, all good reasons (mostly) for being so absent.  All five of us were sick for about 10 days with the flu and cold business that was going around. That pretty much threw us for a loop and we were forced to cancel many plans and lay low for quite a while.  Other than that, I’ve just been soaking up the goodness of raising my little ones.

I’ve always wanted to run a full marathon.  My goal was to run one before I turn 35 (which is later this year).  Back in October of last year, I decided that I didn’t have the time to actually train for the full 26.2 mile race and instead signed up for the P.F. Chang’s 1/2 Marathon.  I’m ok with it and this still pretty great.  This pic was taken at the Phoenix Convention Center where I had to pick up my race bib.  As soon as I heard the band playing and saw the red carpet rolled out, I was already getting pumped to run the race the next day. 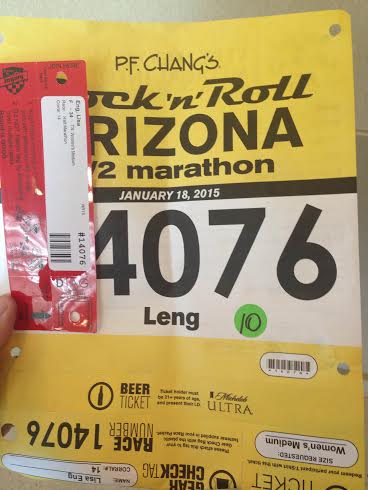 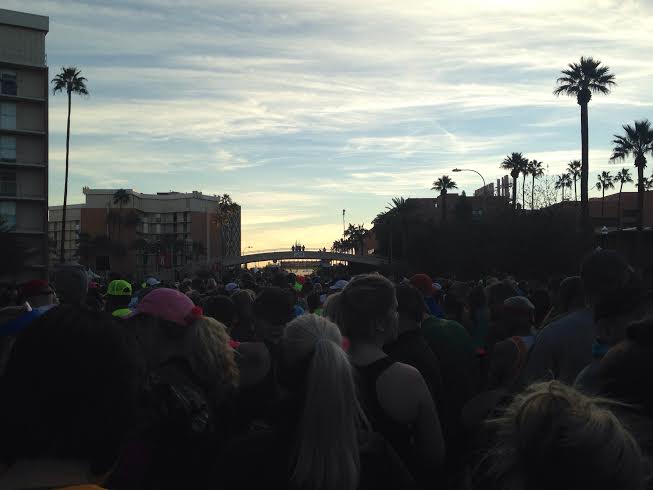 Here is the view of the crowd right before the race.  I had to leave my house at 5:50am to be at the race that started at 7:50am.  Let me tell ya, it was earllllllllly.  I’d only got about 4 hours of sleep the night before and I would wake up every hour to check my phone to make sure I didn’t oversleep.  I was so paranoid that my alarm wasn’t going to go off.  Ain’t no way mama wanted to miss her first race!

Here’s my corral.  I hear that word and automatically think of cows.  And, we all were kind of wrangled up like cattle.  There were over 22,000 participants.  I don’t do crowds well, but this was pretty amazing.  Also, it was a cool 52 degrees when I started and about 64 when I finished.  It was a great day for a run. 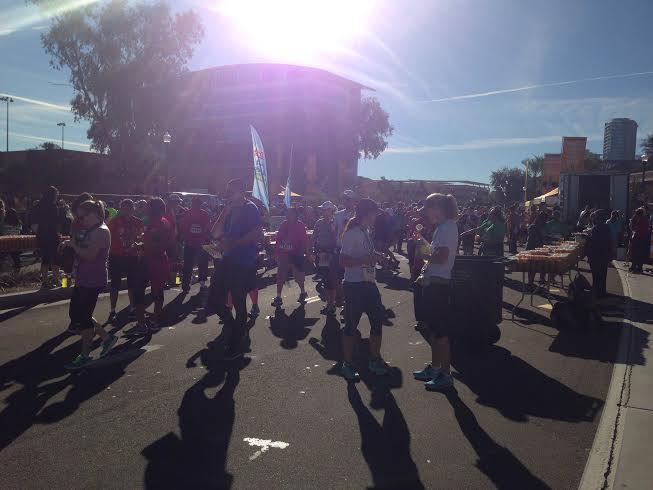 This is after the race.  Now, I know it would’ve been nice of me to take some pics during the race, but I was kind of busy.  You know?  Running and all.  Although, there were lots of people who did stop to take pics and lots who didn’t stop and still managed to pull out their phone and take pics.  I’m not talented enough to do that.

There were so many people cheering everyone on the entire way and bands were setup on the sidewalks playing the entire time.  It was so hard not to want to run faster.  It really got my blood going and I was so into it.  Many people made signs to hold up for their loved ones.  The best one I saw was, “Run faster, I just farted.” Clever ;) 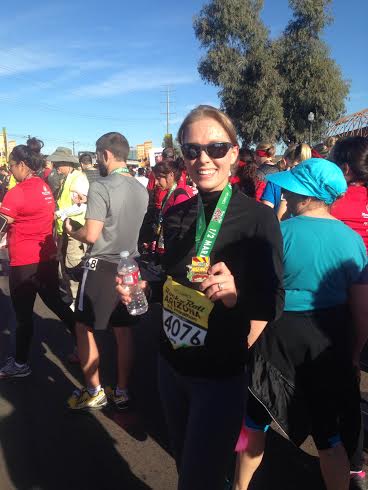 I convinced a nice lady to take my pic after getting my medal.  Everyone was so kind and I met some great people. 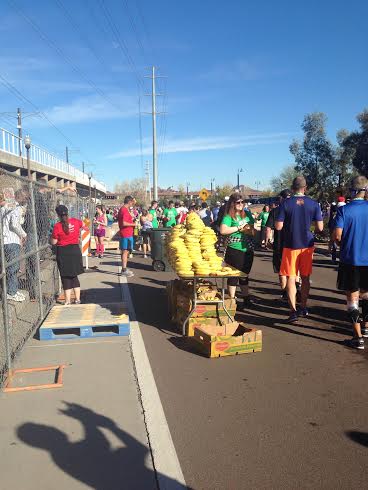 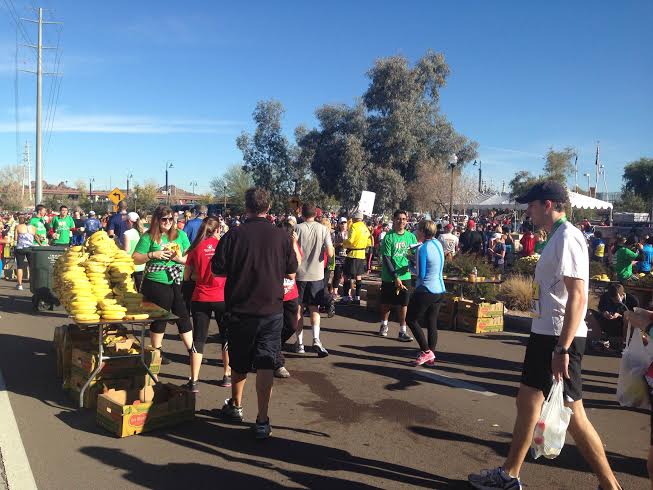 I can’t get enough pics of the bananas.  Let me tell you, it was the best dang banana I’ve ever had. 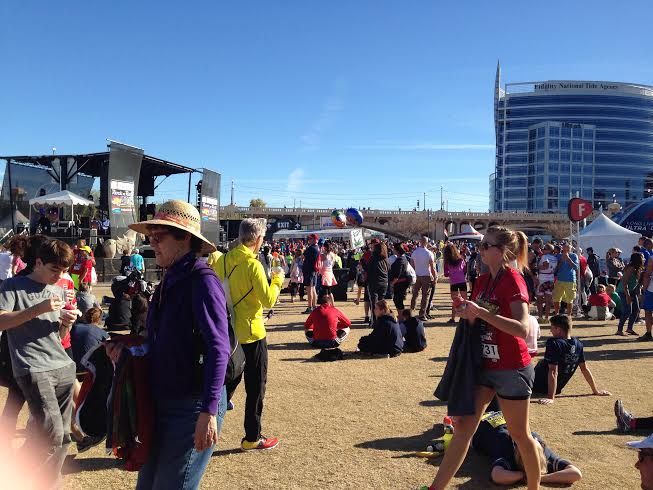 There were people of all ages running this race.  I was truly inspired by the 80 year old (guessing his age) man chugging along, the double-amputee with blades, people in wheelchairs, etc.  These people inspired me to no end.  Many runners were also dressed up in costumes (Elvis, Superman, Wonder Woman).  I also saw a 60 year old (again, guessing on the age thing) wearing a mini skirt with her thong hanging out.  At first I was like, ummm, ok.  Then I was like, who am I to judge?! This lady is rocking it and running 13.1 miles.  Let her do whatever she pleases. Rock on lady, rock on! 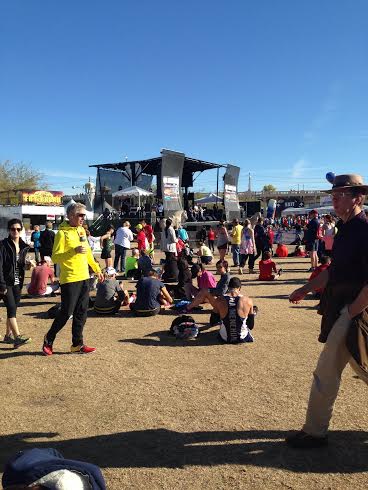 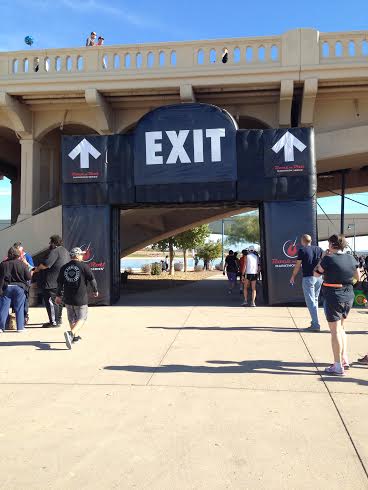 I stayed long enough to listen to The Wallflowers perform, pick up my t-shirt and eat some snacks.  Then it was time to get back on the road and head home to the hubby and kiddos.

This is what I came home to.  So fun and clever :) 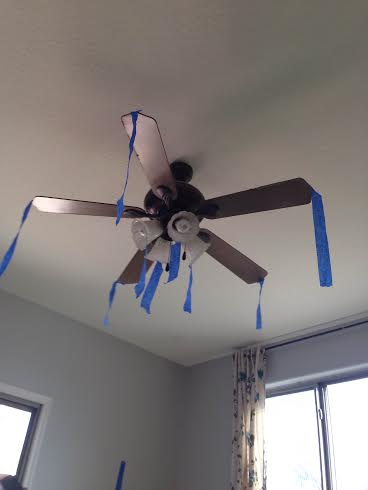 The kiddos thought this was the best thing ever.  I’m pretty sure the fan got turned on and off a bazillion times ;) 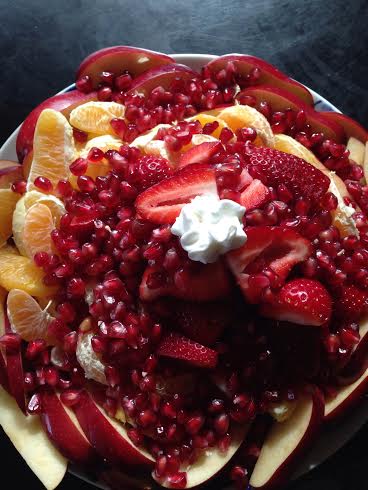 The hubby wanted to know if I wanted a cake when I got home.  After all that running, I couldn’t even imagine eating cake.  So, I told him that I wanted a fruit cake/plate/volcano.  He and the kids definitely pulled through on that!  It was soooo good. 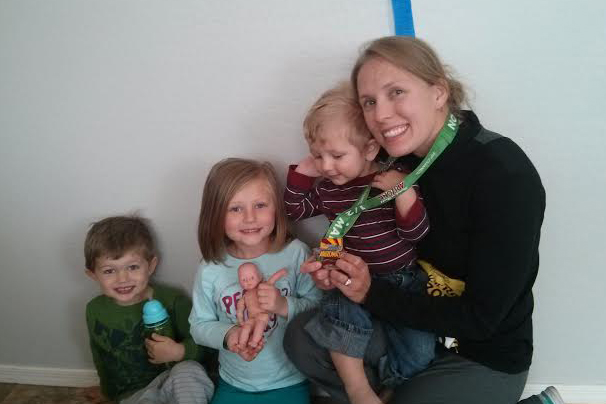 Me and my little ones.  They make me happy :)  The older two kept asking if I won. I told them that I did and showed them my medal.  My middle man said, “Ya but, me not want medal, me want trophy.”  You can’t please ’em all. 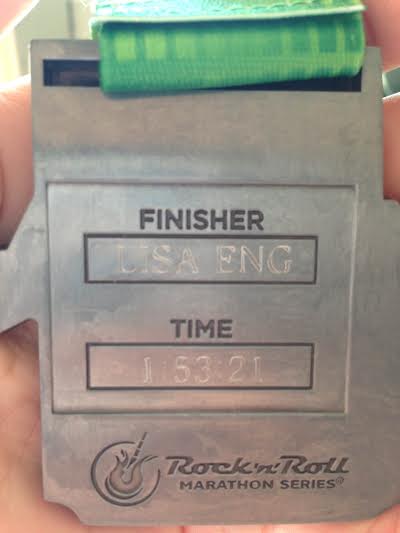 Here’s the back of my medal.  They had a kiosk at the event that you could pay to have your medal engraved.  This is my first race, so it was pretty special to me.  I obviously chose the option to do this.  Besides, now you know it’s official and I didn’t just make it up ;)  haha

So, would I run another one?  Absolutely!  I hope to run it next year…we’ll see :)  In the meantime, I’m icing my aching knees and slowly trying to stretch my legs out so I can walk normal again.  Stairs are my worst enemy right now, but I’m getting there. I have a feeling I’ll be near normal again tomorrow.  I appreciate all of the love and support of my family and friends!  Also, a million thanks to my hubby for supporting me and also surprising me with a 90 minute massage.  I can’t wait to get that booked!  He rocks ;)