Happy Friday!  I have another little furniture remake that I’ve been working on and FINALLY finished.  Man, it sure does feel good to accomplish tasks.  Am I right?

About a month ago, I took my little family to Target to get a couple of items.  Now, if you’re a Target shopper, you probably know that you never end up leaving with a “couple” of items.  We don’t have a Target in our city and it’s pretty much the saddest thing ever.  The closest one is about 15 miles away, so we don’t frequent it but once or twice a month.  I would visit it at least once a week before we moved to our new house.  No joke.  Anyway, back to my story.  So, the hubby left me with the two older kiddos while he pushed the stroller with our sleeping baby.  I had zero intentions of buying bar stools that day, but somehow they ended up in my cart.  Just picture me loading two giant boxes the size of Texas (almost kidding) into my small cart.  Three people saw me trying to lift these things and fit them into my cart and none of the helped me.  One guy actually said, “Maybe you should have had your kids a little earlier in life and then they could help you.  I can’t help because I have a bad back.  Have fun with that!”  Sounds like a true gentleman.  His wife must be so lucky.  I wanted to page a team member and say, “Clean up in Aisle 4.” because that’s what would’ve been needed after I punched….sorry, too much wrestling with the kids.

Back to the bar stools.  I have an island in my kitchen and had plans of placing two bar stools there, but not anytime soon.  I hadn’t been actively looking, but I noticed an end cap at Target with three giant boxes and two of them just happened to be the bar stools you see above.  There wasn’t an actual picture of the product on the box, but more of a stick drawing.  I thought they’d be perfect.  I checked the price tag and it was actually an online item ordered by someone and then never picked up or returned for some unknown reason. Get this, regular price was $109…A PIECE.  I would NEVER pay that much, but they were almost 90% off.  SAY WHAT?!  Yup, I paid $15 a piece.  It was like Christmas.  The clearance gods were watching out for me.  I think I actually heard angels singing. 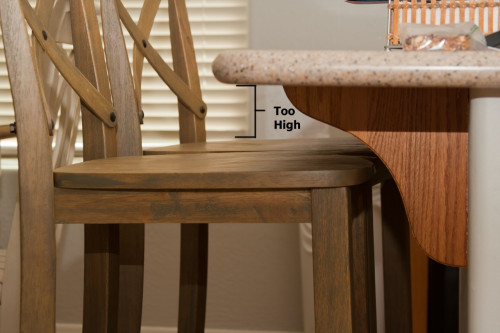 After bringing them home, I had to assemble them.  I then placed them at the counter they’d be at and they were too high.  I couldn’t even fit my leg in there.  I was kind of devastated.  I then started thinking about possibly cutting the legs off.  I wasn’t sure if it could be done or not, so I did some research online and did some measurements to figure out how much I’d need to take off the legs. 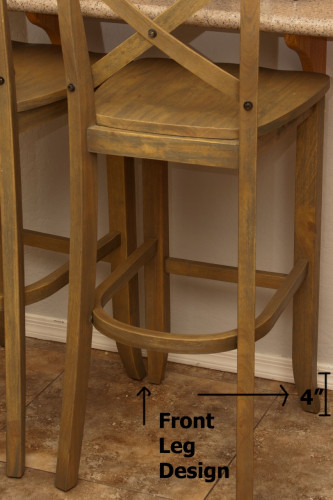 The front legs of the bar stool had a little bit of a curve to them, which extended about 4″ up and then the leg is pretty much straight.  The bar stools were 29″, so taking them down to 25″ would be about perfect.  The back legs were slightly curved the entire way up, but I didn’t see that as being a real problem.  I just had to make sure to make clean, straight cuts to ensure no wobbliness.  Challenge accepted :-)  (Any HIMYM fans out there???)

I found a tutorial online on how to do this process (here).  It worked like a charm!  I removed the little white pads from the parts of the legs that were cut off, drilled a hole in the “new”, shorter leg and popped those in.

They look pretty good from a distance and they don’t wobble – yey!

Just don’t look too closely.  This might have been my first time using a jigsaw ;-) 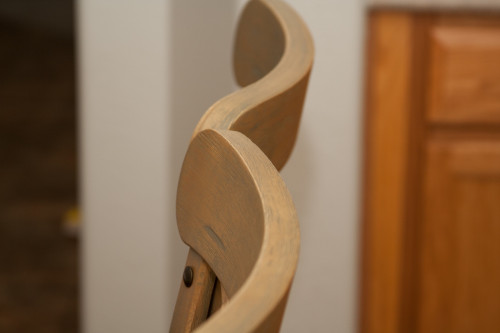 I must say, they look pretty good and I’m so glad I don’t have to return them.  It would’ve been a shame, I tell ya ;-)