I’ve decided to start a little series on here called “Furniture Friday”.  I’m just soooo creative in coming up with names like that.  I mean, I’m sure no one else in the world has ever been as creative as this.  Can you sense sarcasm?  I hope so ;)  I thought about “Makeover Monday”, but I think of people being made over and that’s not what I was going  for.  I’m positive I won’t have a blog post every Friday for this series, but hopefully one a month?  Maybe two?  I guess we’ll see :) 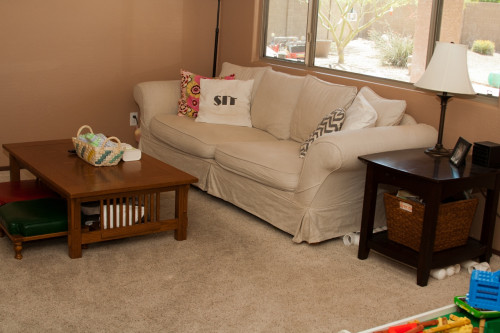 Remember a long, long time ago when I showed the before pics (still haven’t done after pics, but you’ll get a glimpse in the pics below) of our large living room?  You see that coffee table there?  Well, I bought that almost a year ago off of Craigslist.  I never LOVED the piece the way it was, but I knew it had good “bones”.  I had a plan in mind for it, but never had time to get around to it until now.  Since seeing this pic, I’m now eyeing the end table and think I might attack it soon.

In case you weren’t aware, this is a circular saw.  I’ve never used one in my life.  Typically, whenever I want something made, I tell the hubby what I want and he goes off on his merry way to make it for me.  Now he’s all about me learning how to do it myself.  Is he planning on leaving and he wants to teach me to fish instead of feed me fish?  I’m all for learning new things, but I think he forgets how clumsy I am and I’m really not in the market to lose a finger or forbid a whole hand.  Ever since having children, I’m so easily distracted by their screams and cries.  It’s not their fault and I am pretty much incapable of tuning them out. After much begging and pleading, he was kind enough to measure everything out and cut the boards too.  I DID end up using the saw though.  After I attached the boards to the table, I used this puppy to cut a nice straight line down the ends of the table.  In case you were wondering, I’m still typing with 10 fingers ;)  I still don’t feel super comfortable with using the saw, but I will probably try it again in the future.  Kudos to the hubbs for pushing me! 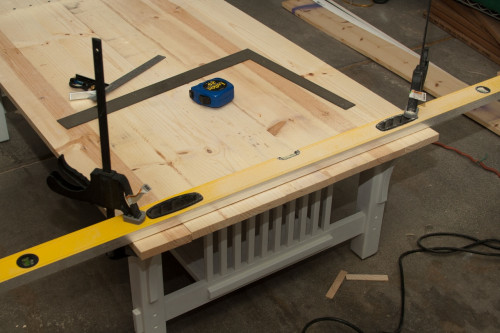 I should have taken a pic of the coffee table before the pine boards were attached, but I basically sanded the entire thing down and then painted the bottom of the coffee table white (I forgot the name of the paint I used…oops).  I did not paint the top of the table because I knew I’d be attaching these boards to it, so why waste time and paint?  I then laid the boards (there were 7 of them) on top of the table.  It took a bit of rearranging to get the boards to lay nicely on the table.  I found the boards in the 70% off wood section of Home Depot and they were a little warped.  You get what you pay for and it took quite a bit to try and straighten these boards, but it was totally worth it…70% off!  Love me a deal :)

After arranging the boards, I visually pictured where I wanted the screws (I used 1 5/8″ drywall screws, which was just enough to go through the boards and top of the coffee table.) and used a level and combination square to get a precise measurement for where the screws would be placed.  I used 4 screws per board (2 on each end). 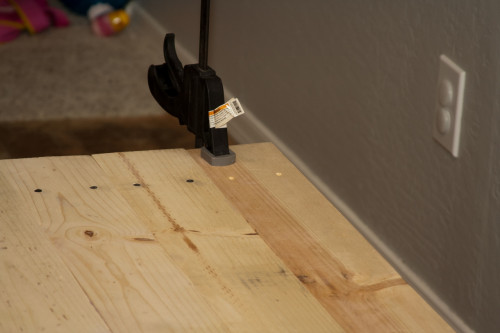 I used an electric drill to make the holes for the screws to go in.  I wanted the screws to sit flush with the board, so I made a divot on top of the screw hole using a counter sink bit.  It worked rather nicely.  (I may or may not have went full boar on the drill and caused it to smoke…oops.  Although, I love the smell of burning wood.  Totally reminded me of shop class in high school.) 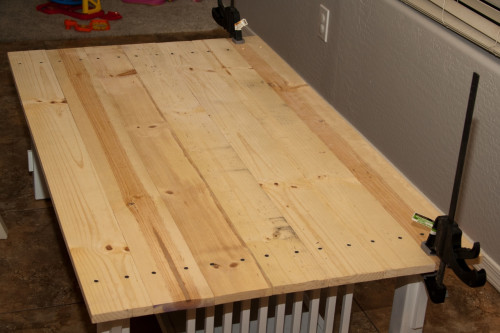 I started with the middle board and worked my way out to the sides. 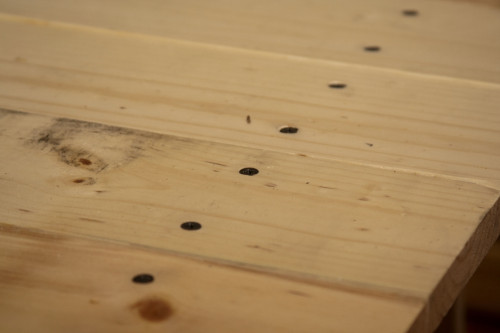 I used black screws, but you could use any color of your choice.  After all of the screws were in, I proceeded to sand the entire table to give it a super smooth finish. 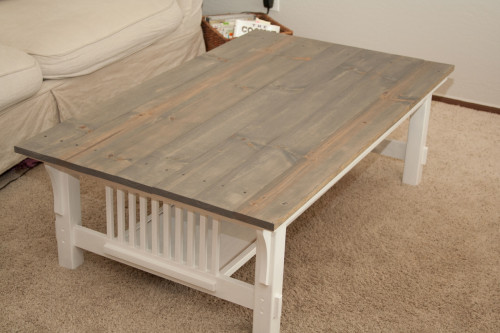 I decided to use Minwax Wood Finish in Classic Gray, found here.  I applied two coats to get this color.  When I bought the stain, I really wasn’t sure that it’d come out gray, but it did and I LOVE it!  I let the stain set for a couple of days and then put a clear wax (here) on it to protect the wood from grungy little fingers :) 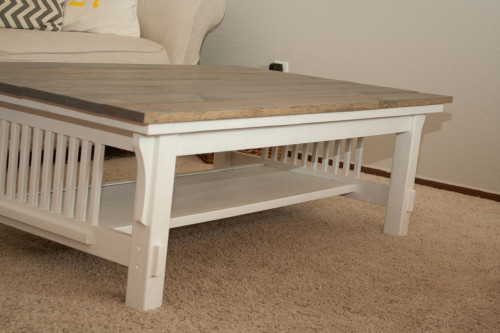 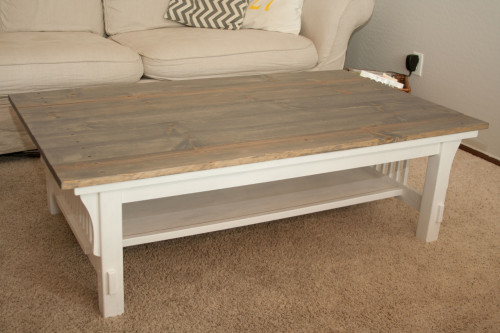 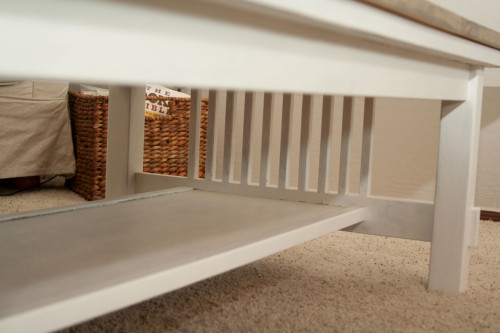 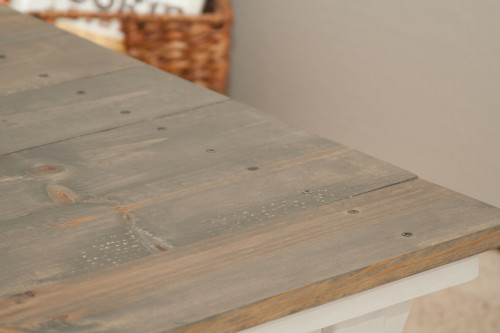 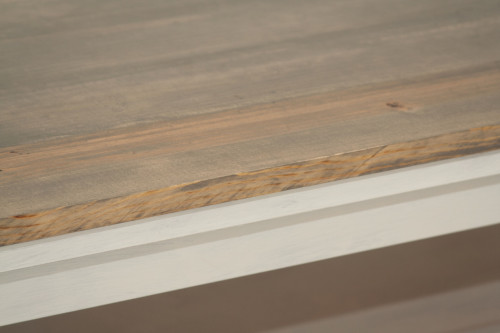 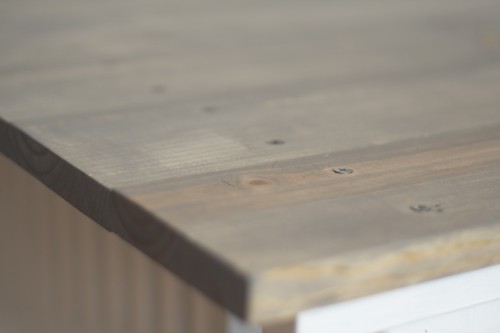 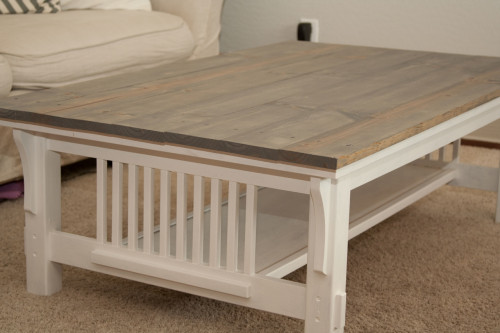 I LOVE how it turned out!  Looks so much lighter, brighter and better than the before…don’t you think?