We celebrated Easter with a visit from the Easter Bunny, dyeing eggs, a ham-less meal (they were all out of stock at the grocery, so we settled for brats…they were pork…close enough…the end) and an egg hunt.  The kids had way too much candy in their baskets and were on sugar overload, so the eggs were filled with monies :) 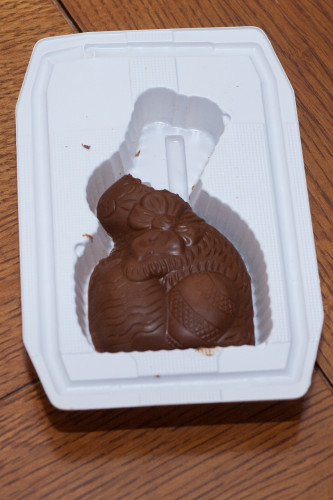 Kid #2 did this to the bunny.  I should have taken a picture of the box because it was like a rabid dog attacked it.  I guess he really wanted that bunny.  Oh, and the Easter Bunny brought lots of jelly beans too…they remained untouched.  I hope he/she got the message for next year…chocolate only. 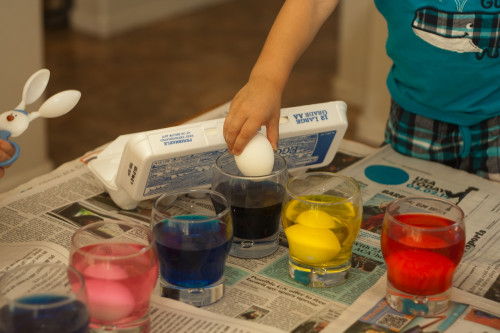 What Easter would be complete without a shout out to Menards (for all my ND peeps)! 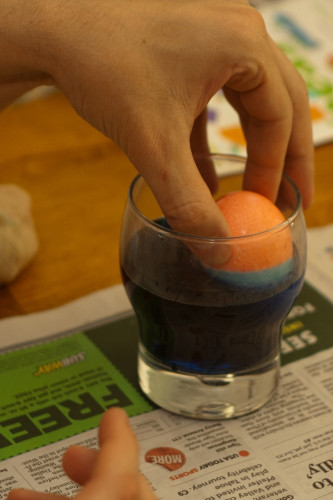 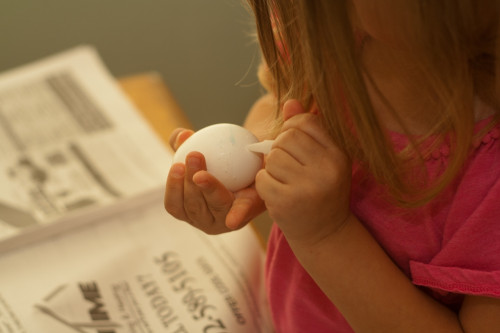 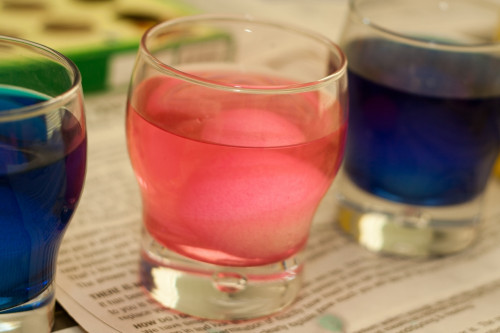 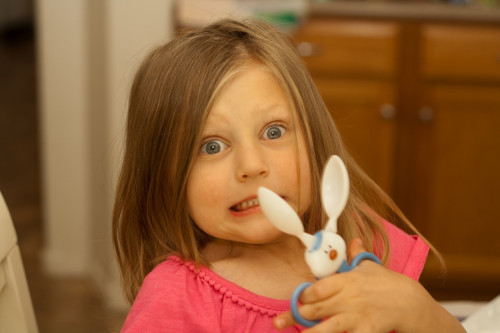 She’s all mine :D 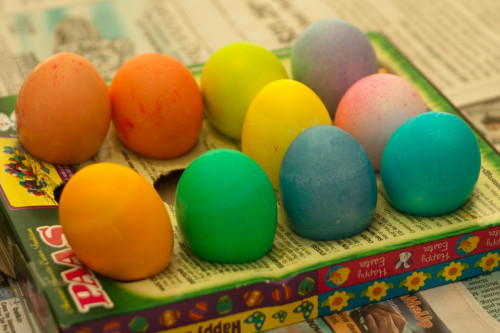 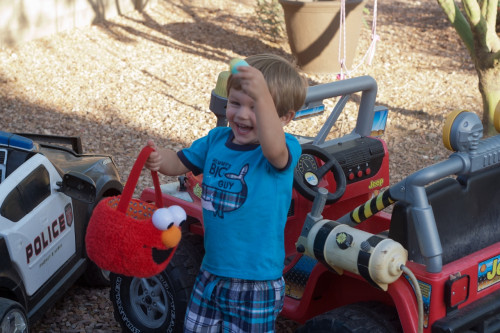 This little man could hardly contain himself during the egg hunt.  He would scream with excitement with every egg he found…pure joy :) 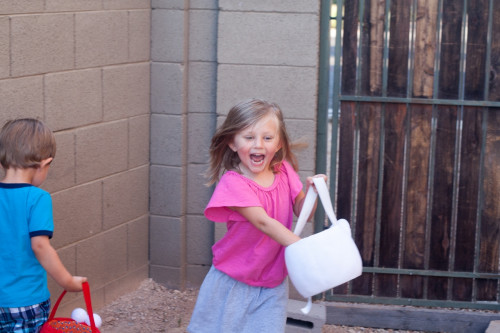 She definitely got excited too! 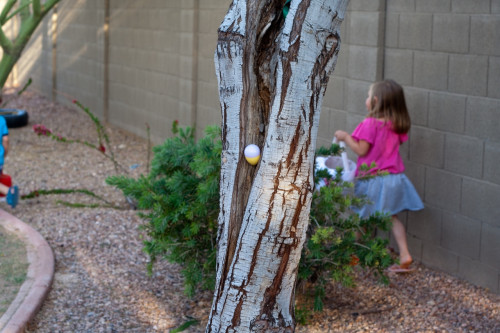 Toward the end of the hunt, there were a few missed eggs.  I think they walked around this tree 547 times and still couldn’t find it. 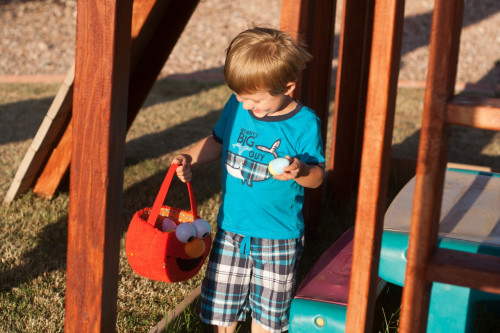 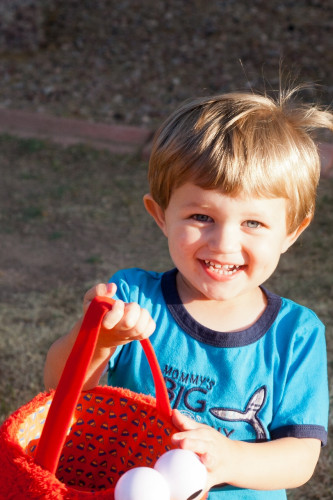 “Look at my basket Mommy!” 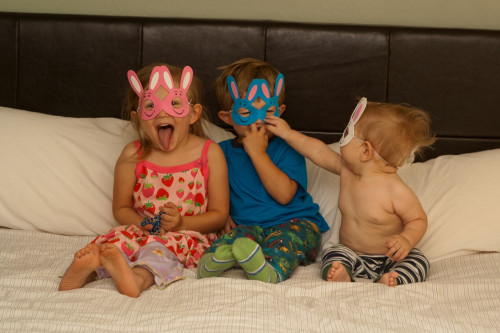 The Easter Bunny also brought some cute masks for me to use while taking some photos of these ridiculously cute beings.  Do you see that neck roll on the baby???  Honestly, he pulls it off well…stinkin’ yummy!  Oh ya and he’s got a major colic on the back of his head, so he also looks like a little rooster.  I almost die of the cuteness really.  Might not be so cute when he’s older, but he can blame his father for that one ;)

“Hey broder?  Your mask still on?”  (Meanwhile, the girl looks like a member from an 80’s hairband.)

“Hmmm, I wonder if I could learn to stick my tongue out like big brother?” 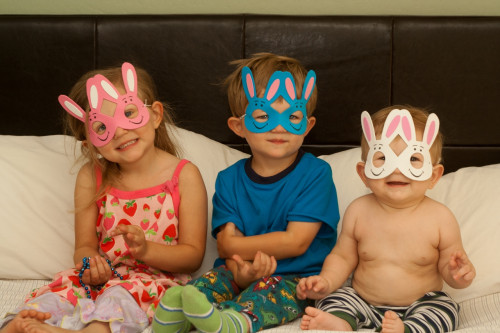 Almost every morning when Kid #2 awakes, he comes downstairs and asks to hold his brother.  So sweet.  Something not so sweet is that Kid #2 has been waking up at least 4x/week (sometimes 2x/night…sigh) screaming in pain that his knee and foot hurt.  I feel for him :(  We think it’s growing pains.  Sometimes he wants us to just rub his leg and then goes back to sleep, but other times it doesn’t work and after an hour of screaming/crying, Tylenol is needed.  We’ve read up on it and they say bananas might help, but he doesn’t want them at all.  I wish it said to try donuts because he’d be all over that.  The hubby has been awesome at helping with this because I’ve got the baby all night and it’s impossible to be in two places at the same time.  Anyone else have a youngster go through this?  He’s been having these pains for almost a year now, but it comes and goes.  It’s definitely gotten worse in the past month.  It only happens in the middle of the night.  He is completely fine during the day.  I want to poke my eyes out.  Sleep.  We all want it.

The baby said his first word on Monday.  It was ‘mama’.  I can’t tell you how excited I am!  My other kiddos said ‘dada’ first.  It’s so thrilling when your baby says his/her first word.  I’m so glad that one of them said ‘mama’ first :)  He turns 7 months tomorrow. 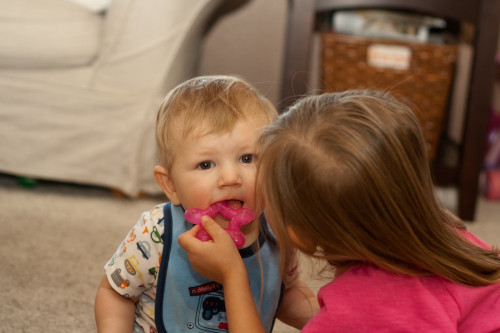 We are also in the teething phase and it really is painful for all involved :( 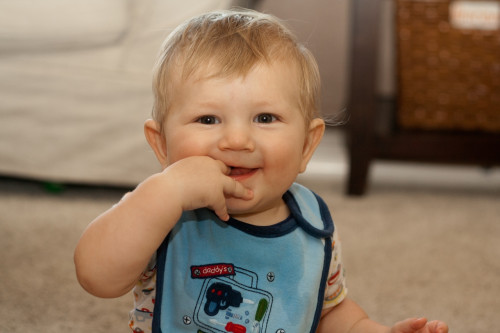 Speaking of the little chunk, he’s such an awesome eater.  I remember trying to start solids with Kid #1 and it was a complete nightmare.  I kid you not.  I totally stressed over it and there may have been an incident of baby squash hitting the ceiling.  It’s kind of like how some people hate going to the dentist (not me, I LOVE it…for reals!) because they’ve had an awful experience in the past and can’t forget the pain and suffering that it caused them and so they continue to hate the dentist forever.  Yup, that’s how it was when I started my other two on solids.  I immediately cringed and expected the worst, but had no reason to because my boys love to eat.  They take after me…food is gooooood.

Here is a pic I captured the night of the ‘red moon’.  This was at about 6:45pm.  I just thought it was a beautiful view.

Here is a pic of the actual ‘red moon’ that the hubby took in the middle of the night.  I was more focused on getting sleep ;)  I’m so glad he stayed up to get a pic – props to the hubby!

That’s what we’ve been up to.  How have you been?