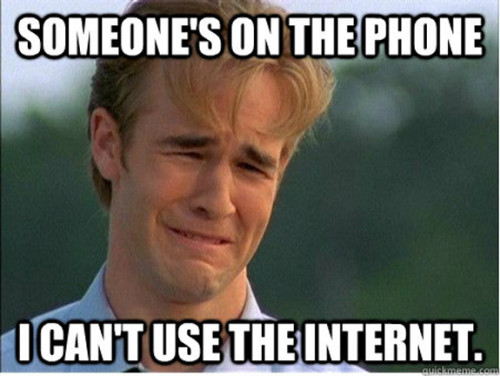 So, let’s just transition from Gone with the Wind to Dawson…makes perfect sense, doesn’t it?  Anyway….does anyone remember the days of not having the internet?  I remember when I was around 16 or 17 years old and I got my own phone line and had dial-up internet.  Chick-bong-chick-bong-wee-ur-wee-ur…or whatever that sound was coming from the modem.  I was the first one in my family to get the internet.  Probably because I had a job and needed something to spend my $$ on.  Anyone remember ICQ (uh-oh!)?  It was the first chat program I used.  Ahhhh, memories…and weird noises.  I used to do tech support for Gateway computers and Disney software.  It’s actually where I met the hubby. I still remember what he was wearing the first time I met him ;-)  Gosh, I think about it now and we were just kids.  Heck, we’re supposedly adults now, but we are definitely kids at heart.

Having the internet now is pretty much a standard in every home.  I mean, everything is on the internet and we’re always like, “Oh, I’ll just look it up online.”  It never used to be that way and I really don’t know how we made it back in the day.  I’m surprised we’re all still alive.  So, while there is a lot of good to having the internet, I also find a lot of bad in it.  I really dislike going online and seeing so much negative stuff.  People really do hang out their ‘dirty laundry’.  Some things just don’t need to be put on Facebook.  I also dislike when people are arguing online.  It’s so incredibly hard to not take things out of context because can you really tell how someone is feeling online???  If I haven’t mentioned it before, I like to confront people using my voice, it’s so much easier.

When I feel threatened by someone online or feel that someone is mistreating me or my family, they are deleted from my friends list.  Sometimes, it’s what’s NOT SAID that hurts too.  A friend once told me that sometimes you can be friends in life, but not FB friends.  I think there’s a lot of truth to that.  I do not have the time or patience to deal with it. I know some people might handle it differently, but it’s just not worth the stress and drama to me. I used to stress about anything and everything, but that is really no way to live.  It wears a person out – like big time!  I’ve learned to let things go and try not to care so much. To be honest, I get so drained from trying to please people and get nothing in return.  AND, you’d think that family/friends wouldn’t be so harsh. Sometimes it’s easier to just let go. Trust me, I am so much more relaxed and calm from just letting go.  I know that family and friends are everything, but MY little family means more to me than anything and when someone ticks off this mama bear, you’d best be deleted from the friends list.  Even if you are family or a so-called “friend”.  I haven’t deleted this person from my life, just from FB. (Just to be clear, I love my family and friends dearly and I’m not saying anyone is a bad person, but we’re just not meant to be together on FB.

One thing you will never find me posting are videos of my children.  I have to draw the line somewhere.  It’s totally a personal preference, but some things I choose to only share with certain people or keep them completely to myself.  I do post pics, but am careful which ones I do post.  The hubby doesn’t really want me posting any, but I find that hard to do with my kiddos.  I might be biased, but they’re stinkin’ adorable and I want to show them off every now and again ;)  I try not to over-post because I don’t want it to be overwhelming either.

I think surrounding yourself with people that have a positive attitude is so important.  If you always look at the glass half empty, you’re missing out on so much.  The hubby says that I have ‘Pollyanna’ syndrome….you know, think that everything is all rainbows and unicorns. I don’t think I’d go THAT far because I know that rainbows only come out when it rains and it hardly ever rains in Arizona.  Also, unicorns are hard to come by ;-)

There are also people who make fun of people just to make themselves feel better.  I’m pretty sure I’m guilty of this one in my younger years.  You have to know when to draw the line at joking.  Sometimes, it’s a very fine line.  I just choose not to go there.  Everyone has a different sense of humor and you have to know who your audience is.  I know that the hubby ‘gets me’ and we can joke about something for a long time.  It’s the best.  Then there are people who don’t ‘get me’ and I know to cut it off and realize we’re different. And that’s OK.  You kind of have to tweak each relationship based upon who you’re dealing with. Don’t get me wrong, BE YOURSELF, but just be aware of who your audience is.  I’m pretty sure most people treat their relationship with their boss different than they do with their best friend.  Not?!

You get to a certain age when you don’t care what people think of you.  I’ve been at this stage since I started having kids.  I guess something changed me in labor and delivery (kidding).  I think you realize how precious and short life is once you have children and you want to protect them from all bad.  Although that’s impossible, you can do your best to surround them with positive energy and loving people.  I think we need to set a good example for our children too.  And listening.  Oh how important it is to be a good listener. One thing I hope my kids think I am is a good listener (and baker…there’s always that one too).

Well, I didn’t mean for this to be such a heavy post, it just kind of ended up that way.  I guess I had a lot on my mind.   CHEERS to letting go!  Thanks for listening :)

6 Replies to “Frankly, My Dear, I Don’t Give A Damn (Maybe I should watch the movie before quoting it?)”