I don’t know why, but kids always seem to get sick on a weekend or a Holiday.  Never fails. Last week, my middle one spiked a fever of 103.5.  I started the Ibuprofen/Tylenol process right away to get his fever down and by the next day it had come down slightly, but then he started pointing at his cheek saying it hurt.  I looked in his mouth and sure enough, white bumps on the enlarged tonsils and a blotchy red back of throat.  The hubby took him to the Urgent Care (I had a little issue with this and wanted to be there with my sick baby, but duty calls at home with my infant.  Daddy was great!) and they said it was strep throat, so we got antibiotics and on Friday he was already feeling much better.  Then Saturday morning arrives and he’s got red blisters all over his toes and inside of his feet.  WTH?!  We were supposed to be attending the Veteran’s Day Parade that morning…apparently viruses don’t care.  The doc at the Urgent Care did say he could develop a rash from strep, but just to make sure, we called his Pediatrician.  It didn’t sound or look like an allergic reaction, but we wanted to make sure.  Apparently, he has the hand-foot-mouth virus.  Sounds yummy, doesn’t it?  Oh my poor little man.  I hope he’s not like me when I was a kid…always have strep throat or tonsillitis.  It’s not fun giving this guy meds either. He fights it and there may or may not be bribing going on at the time ;)  Anyway, he’s on the mend (I hope) and is running around like an animal.

On another note, I went grocery shopping and happened to see several carts filled with leftover pumpkins from Halloween.  They were only $1 a piece!  Now, if I were thinking, I would’ve put my groceries in the van and went back in and bought some.  I wasn’t thinking.  I came home and told the hubby about it and he asked why I didn’t buy any.  I have no explanation, other than that I have mommy brain or it was pure stupidity…whatev.  The grocery is on the way home from work for the Hubby, so he stopped and got me 5.  You will see there are only 4 in one of the pics below…we lost one to mold :(.  I have never decorated for Thanksgiving before and wanted to make a centerpiece for the dining table. 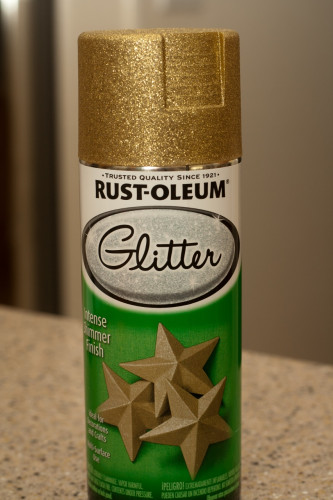 We got this gold glitter spray paint from HD.  I wanted to spray half of the pumpkins this color.  I didn’t take any pics of me spraying the pumpkin.  I thought it would be pretty obvious how to do that.  If not, make sure it’s done outside on cardboard or paper.  NOTE: There will be over-spray. 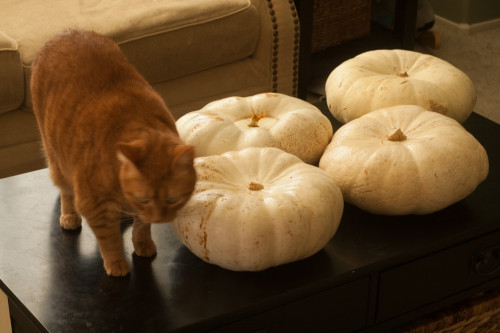 Here are the $1 pumpkins in all their glory.  Oh ya, and a cat named Peanut :) 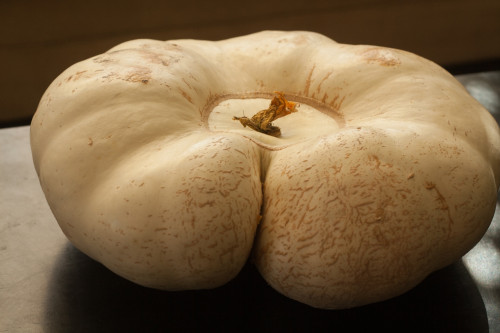 When the Hubby was at the grocery store buying these, he calls me and says, “Hey, do you want one that looks like a butt?”  Yup, I did :)  Isn’t it cheeky?  heehee  I’m a sucker for imperfect things. 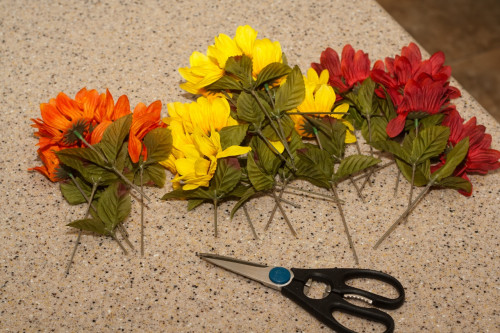 I had these flowers that I got from the Dollar Tree several years ago and decided to use them in my centerpiece.  They came in a cluster, so I just cut the ends to separate them to individual stems.  I could’ve get more real looking flowers, but that means I’d have to spend money for something I will be using for all of 3 weeks…no thanks.  We’ll just overlook the fakey-ness of these ones ;) 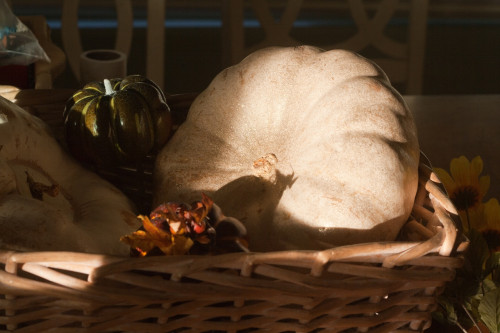 Here is a pic of the gold pumpkin at 7:30am with the sun beaming in through the window. So pretty, don’t you think? 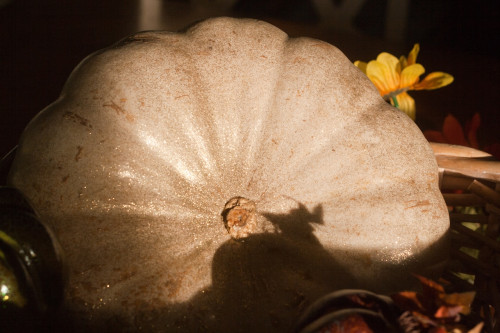 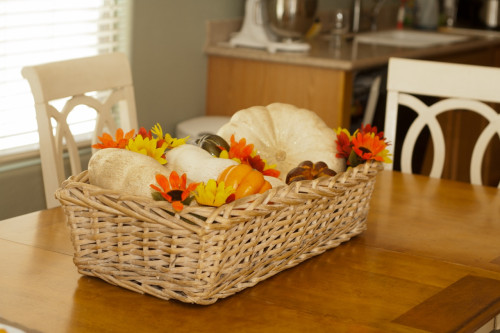 Here is the final product.  I got the basket at a garage sale for $1 several years ago – woot! 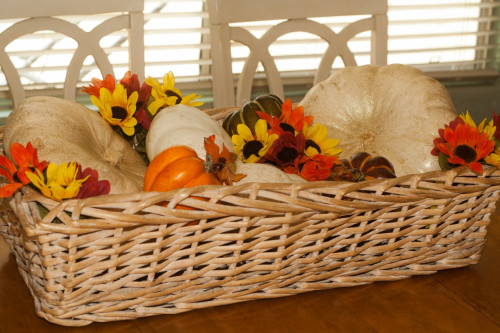 I definitely don’t pride myself in flower/basket arrangements, but I think it looks pretty good. In case you were wondering, I only used 3 of the 4 pumpkins in this basket.  The 3 little pumpkins you see are from years ago and were bought at Michael’s.  I love making things out of stuff I already have on hand.  Call me cheap ;) 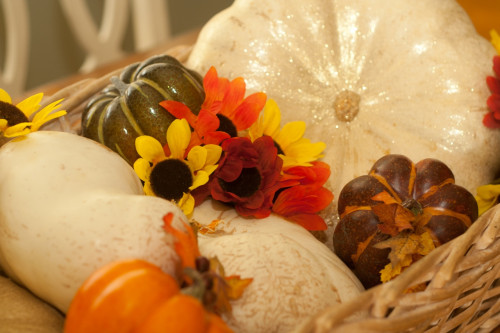 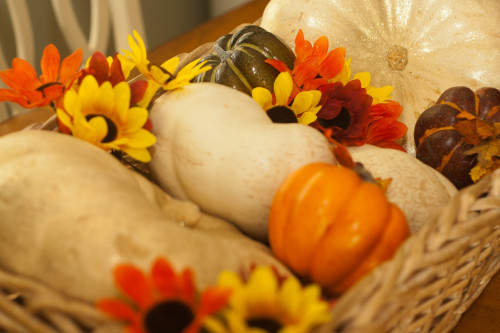 There ya have it, a super-easy project to tackle for yourThanksgiving table.  Now…bring on the pumpkin pie!  How was your weekend?