I’ve been craving chocolate a lot lately, but try to only nibble and piece here and there.  Sometimes the craving is fulfilled and other times I get crabby because I deny myself the sweet satisfaction.  It’s really a lose-lose battle in my head some days.  Anyway…I was craving chocolate chocolate chip muffins, but decided to make a box cake instead.  A while back I was on Pinterest and found an idea to add 1 can of pumpkin to a box cake mix…no eggs, no oil, no water.  I like cake and my love for pumpkin runs deep, so I decided to try it.  I kind of made up my own recipe and just went with it.  I used to measure everything and follow the recipe to a T.  The hubby made fun of me.  A lot.  He prefers the “grandma” way of cooking…a little of this, a little of that.  It has taken me years to adapt to this method, but I think I’m finally there.  There are still things that I refuse to eyeball (like baking soda, powder, flour), but everything else is a guessing game.  Has anyone watched ‘The American Baking Competition’?  We accidentally turned to it one night while flipping through channels.  They were making pie.  If I could eat anything, it would be pie.  I was immediately hooked on the show and Tivo is so nice to record it for me weekly.  Thank you little gnome in the box for fulfilling my wishes.  The hubby said he probably won’t watch it…he lies.  He’s watched every episode with me already and I don’t see him stopping (me happy).  Anywho, since I ‘grandma’ bake now, maybe I could go on the show? :-)  I’ve also picked up quite a few tips from the show, so it’s not a complete brain-rot of reality tv.  Here’s the recipe I came up with:

Preheat oven to 350 degrees.  Mix cake mix and pumpkin together in a medium bowl.  Then stir in chocolate chips.  Spread (I say spread b/c the mixture is pretty thick) into a 9×13″ greased cake pan (you could do loaf pans or bundt pan too, just adjust baking time) and bake for 25-35 min.  Mine took 35 min b/c I live in the desert and it takes longer to bake things.  Test it with a toothpick to make sure it’s done.  I’d probably store it in the fridge to keep it fresh and it will last longer.  Oh ya, and don’t forget to cut off your box tops for education…help the kids.

I had some fat free cream cheese glaze leftover from when I made homemade doughnuts, so I spread that on top of the cake after it cooled for 10 minutes.  It’s pretty flippin’ delicious  if you ask me.  This cake is super moist and oh so lovely in flavor.  Make it…I dare you.  My piece didn’t even make it to the plate. 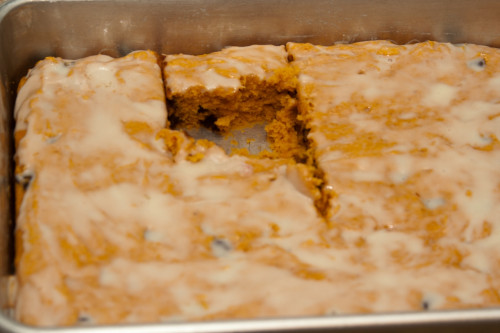 Oh and if you’re thinking that you don’t need dessert and trying to talk yourself out of it…don’t.  I went ahead and did the calorie count for you and it’s a measly 205 calories per piece, if you cut the cake into 12 pieces.  If you’re worried about fat content, it’s 56g in the entire cake.  Eat away my friends :-)